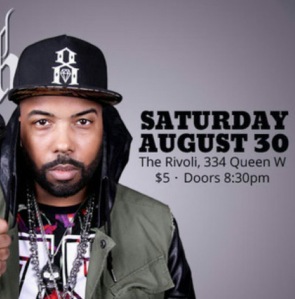 Keysha Freshh will be performing for the Roots own, Scratch at his birthday event August 30th at The Rivoli.

“Originally a member of Philadelphia based rap group, Schoolz Of Thought, he joined The Roots in 1998.

Scratch released his debut solo album The Embodiment of Instrumentation in 2002 on the Rope A Dope record label. It featured The Roots, Dice Raw, E.S.T of Three Times Dope, Cyph Born of Aphillyation, Bilal, Jill Scott, Malik B and M.A.R.S. Co-Op. After the release of his solo LP, he abruptly left The Roots in 2003.

He now continues to tour the world.[when?]

In 2004, Scratch contributed to Zap Mama’s Ancestry in Progress on the track “Wadidyusay?”.

Scratch is a member of Dino 5, who realized their first album Baby Loves Hip Hop in 2008. Scratch plays Teo, a Pterodactyl.